Jeanneau History is well documented on the internet, information found usually goes back over the 60-year history. This page will only mention Henry Jeanneau and the distant past briefly as we feel the recent history of Jeanneau is more relevant today.

Considerable changes in new boat production have taken place over the last 20 years, none more than with Jeanneau boat and yacht production. Significant changes came when Prisma moulding was introduced to the Jeanneau product between 2005 and 2010. Add to that the evolution of hull construction and a more cost-effective solution to interior woodwork, the results being that sail boats built in the 90’s bear little resemblance to the craft we see today.

Hull shapes 20 years ago and before were built in the traditional way using uncomplicated lines. A straight forward design being necessary for an uncomplicated mould.  A sailboat deck was constructed in two parts and then glued or even screwed together to form the Yacht. Many surfaces would not have a smooth finish and had to be hand-finished. The old hand-laid deck of a yacht would typically be 30% heavier than its Prisma moulded counterpart.

The Jeanneau 39i was one of the first production boats to get a Prisma Moulded Deck. A quiet revolution that met some resistance.

Prisma Moulding excellent for the environment.

I remember going to an American shipbuilders yard back in 2001. As we entered the building, the stench of fibreglass resin was almost overwhelming. The light-hearted advice from the guide was to keep walking until we were out of the workshop! I realised if I paused too long my shoes would become fixed to the floor! None of the workers used respirators. This excursion to the USA was not to a Jeanneau factory; however, all boat builder using a spray to apply fibreglass to resin suffered from vapour problems. Now if you enter a workshop owned by Jeanneau (Group Beneteau) you cannot even smell fibreglass. The air is clean, thanks to injection or Prisma moulding.

As Prisma moulding developed designers realised they were from of traditional angles. Yacht designers are now able to experiment with deck shapes that have transformed the way yachts look. Gone are the days when a locker door is open a buyer can see rough fibreglass. All surfaces are smooth. It’s also a fact that a Prisma Moulded deck is lighter and stronger than its conventional counterpart.

Screws are no longer necessary.

Back in early 2000, a hull was screwed to the deck of a yacht. Visible screws or bolts along the deck joint and around windows were a selling feature showing the integral strength of the Yacht. As Glue and resin developed Jeanneau realised it was possible to join a hull to a deck with only Glue. For some time in the mid 2000’s decks were both glued and screwed. The only reason for using screws in this interim period being that Jeanneau thought the market was not yet ready to accept an entirely bonded together hull. Sicoflex sealer has now become an essential tool in the shipwrights’ tool kit. Now a Glue called Sicoflex similar to that used by boat manufacturers is used throughout the marine industry. 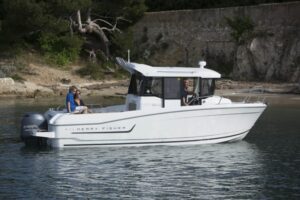 The end of teak veneer

A real teak veneer was used in production until around 2006. The significant disadvantage to this being the global cost of teak and the difficulty of consistency. Small imperfections in a wood pattern often plagued boat builders. Inconsistency in the quality of wood continued until a man-made wood finish wood became available. From then the grain is manufactured to match. From this point, Yachts became a little less personal; however, on the upside, replacing a door or panel became just a matter of ordering a spare part as they were all the same.

The evolution of a brand

Over 60 years ago it took Henry Jeanneau and a group of creative individuals to create a brand. It is fair to say at its conception market conditions fell in favour of this company then experienced and judgment (with a little more luck) has carried this great brand to where it is today. If Beneteau had not taken over Jeanneau some years ago the brand might not have survived. The fact is the brand did survive the ups and downs of 60 years regardless of ownership. This survival is a credit to all who work for the company and believe in the Jeanneau brand.