Dufour Yachts is a very French boat built in France. The award-winning Dufour company started producing cruising yachts over 50 years ago. Distinctive French styling, clever ideas, and excellent performance created a yacht that most people are happy to sail. Charter companies have a love affair with Dufour Yachts.

In 1964 Michel Dufour worked as an engineer in a train factory. As he was in charge of the workshop that made parts using revolutionary new material fibreglass, he quickly realised the potential of using fibreglass material for boat building. Living close to LaRochelle, a place well connected already with an intense sailing and boatbuilding history. Michel Dufour was a passionate racing sailor. It wasn’t long before Michel’s passion for sailing, combined with his technical knowledge of fibreglass working, spawned the idea for his first Dufour yacht, called the “Sylph”.

Building on this success, they launched the 29-foot L’Arpege in 1967. Dufour built over 1500 models within ten years, and now the L’Arpege is widely agreed as a legitimate classic. By the early ’70’s Dufour became the leading exporter of French fibreglass sailboats employing over 400 people. They exported boats to over 40 countries, winning the national Export Prize for France. Selling over 700 boats, the Dufour 24 was probably their best seller. The Dufour 35 had enormous space below decks and outstanding performance under sail.

Selling more than 900 Yachts from 1973, the Dufour 31 Yacht was highly innovative for her time with spacious six berth accommodation.
From 1978, the Dufour 2800 became the successor to the 27 and saw 1300 yachts built over a period of 6 years. By 1979 German Free had designed the Dufour 3800, which is recognised as an exceptional yacht. In the ’80s & ’90’s nothing could stop this company, and they expanded rapidly. Acquiring long term rival GibSea Dufour Yachts worked closely with French clothing designers Lacoste to created the Prestige and Classic Ranges. 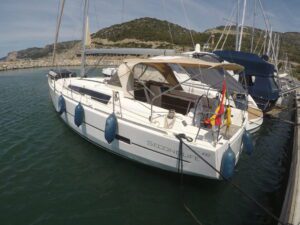 In 2013 the company was reorganised through a management buyout from the Bavaria Yacht Group. This growth allowed the leadership team to drive forward with quality build techniques and a continued investment focusing on quality sailing boats’ production.

Find your yacht on our boats and yachts available for sale