This place is a famous tree-lined pedestrian street; it stretches for just over a kilometre. Las Ramblas connects Plaça de Catalunya in the town centre to the Christopher Columbus Monument at Port Vell.

Las Ramblas marks the city boundary between the Barri Gòtic and El Raval areas. You can find many historic buildings such as the famous Liceu Theatre on this street. La Boqueria market joins Las Ramblas, one of the city’s most famous tourist landmarks. From our office in Port Ginesta, you can arrive in Las Ramblas by train or car. Travelling from our Network Yacht Brokers Barcelona office, the simple way to arrive is by taxi and train direct from El Prat International  Airport. 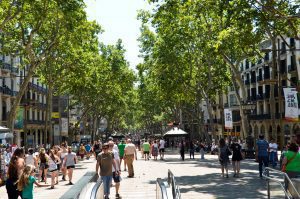 History of the road

The name Las Ramblas originated from the Spanish verb “Ramblar”, meaning to ramble. This road has five sections, and each has its history and personality. Las Ramblas is known so well because of its rich history. The first three areas are called Rambla Font de Canaletes (The Canaletes fountain), Rambla dels Estudis (Jesuit University), and Rambla de Sant Josep (also known as Rambla de Les Flors), an open-air flower market. The next area is called La Rambla dels Caputxins. Formerly the site of the Capuchin monastery, where the Liceu Opera House now stands. Lastly, La Rambla de, once the location of the Convent of St. Monica, has become an Arts centre.

A busy place, visit with caution.

A busy place during tourist season, Las Ramblas gets very crowded. It has changed a lot since the 19th century; it is well worth a visit. We recommend a stroll in the morning before it gets too busy. There is plenty to see, from flowers to mime artists and acrobats.

The area does suffer from pickpockets who love tourists. Late at night, it becomes a little more of a red light district,” and we do not recommend walking around as a tourist alone. Plenty of police monitor the city, but the authorities in Barcelona appear to be in denial about the need for a CCTV system in the city centre.

Dangerous or violent crime in Barcelona is very infrequent. However, the petty crime of pickpocketing has almost become a way of life. The pickpocket evil can be avoided by ensuring that your valuables are safe.

One sizeable connecting square is Plaça Reial, a lovely 19th-century square with palm trees and lighting designed by Antoni Gaudí. The entrance to Plaça Reial is down a short entrance passage, just off Las Ramblas dels Caputxins. A little further into the Barri Gòtic is the Cathedral of Santa Eulàlia. Nearby, Plaça Sant Jaume houses the Generalitat de Catalonia and the Ayuntamiento – Barcelona’s City Council. These are the rival Catalan and Spanish Governments entities of Catalonia.

To the west of Las Ramblas is the somewhat different El Raval quarter. They were once situated outside the city walls. Initially, this area was the site of various institutions. In later years, factories and buildings appeared with housing for the workers. Hectic nightlife, lounges, and prostitution are widespread in this area. Today this part of the city retains a degree of ‘edge’ late at night. In Barcelona, though, these places are all quietly sleeping when the sun is shining.

Further back in history

Las Ramblas was initially a muddy stream, used as a sewer and filled with rubbish. It was often dry in summer, but as a drain, it was essential to cope with the heavy rain which flowed from the Collserola Hills in the spring and autumn. In the 1400s, the stream was diverted to avoid the city centre. The wide strip of land became the town centre spot for markets and public gatherings.

In 1703, the council planted elm trees to line the street to make it more attractive.

Conflicts over the centuries took their toll on Las Ramblas religious buildings, most notably on St. James’s Night in 1835. Revolutionaries burned down the monasteries and churches and then murdered all the occupants. During the Spanish Civil War (1936-39), Barcelona was under the control of anarchists who targeted religious buildings and massacred the monks and nuns. Artillery fire and air attacks by pro-Franco forces during World War II also caused severe damage.

Today Las Ramblas is a busy commercial centre and one of the most visited places in Europe; we get around 30 million tourists a year.

Talk with us to know more about this area.