A Spanish Marina in Catalonia 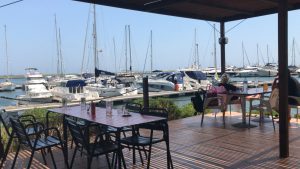 Sant Carles Marina is owned and operated by MDL, a British leisure and resort company. The only Marina they own outside the UK is a treasure for boat owners during the long summer months of Mediterranean warmth. Sant Carles Marina is a couple of hours south of Barcelona. It’s not a huge Marina but has a good mix of both power and sailboats.

Network Yacht Brokers Barcelona attract a good number of listing from Sant Carles Marina, one of which finally came north to Port Ginesta Barcelona so that we can deal with potential sales daily. We had a busy day preparing the yacht to leave Sant Carles Marina as she had not been visited by the owner in more than one year.

As Sant Carles Marina is set slightly inland, surrounded by fields and marshlands, fouling is a particular problem. So regular washing of boats in the marina is essential to keep the marine environment from taking up residence on your boat. 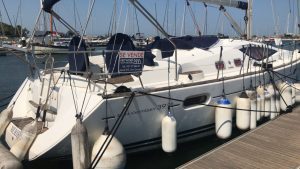 Mission accomplished for the Jeanneau 39 DS Yacht we now have for sale in Port Ginesta. We gave her a good scrub for the owner, who then made the journey up the coast to our home Port. This Jeanneau 39 DS Yacht is in excelent condition. She has a huge inventory, including electric winches, bow thruster, air conditioning, and a neat solar panel system designed to keep the start battery fully charged.

If you want a yacht with an interior best described as “as good as new”, please follow the link and look at this beautiful example. The photographs in the specification were taken by ourselves when she arrived in Barcelona in August 2021.