Find a Pirate Ship For Sale? Sure we have one!

Pirates were never more popular than in recent years as we all followed Jonny Depp as Captain Jack Sparrow. One film storyline finds the winds of ill-fortune blowing against Jack Sparrow when a deadly ghost pirate Captain Salazar and his mates escape the Devil’s Triangle. They have only one aim and are determined to kill every pirate at sea, including Captain Jack. The only hope for Jack Sparrow is if he is to survive lies in finding the legendary Trident of Poseidon. Not such a simple task? This powerful artefact bestows upon its possessor total control over the seas. Wow, compelling stuff! 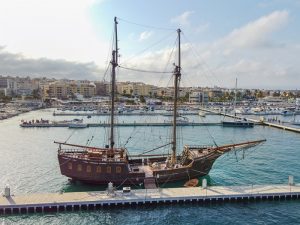 We have a real replica Pirate Ship sold at Network Yacht Brokers Barcelona.

Here are a few famous pirate ships. She is a fake made some years ago as a tourist attraction.

What about real Pirates

In the day, you could not find a Pirate Ship For Sale anywhere! They called it the “Golden Age of Piracy,” thousands of so-called pirates, buccaneers, corsairs, and scurvy sea dogs made a living by plundering all manner of ships at sea. Romantic stories of pirates are many. The hard reality is that little has changed in the world. So-called pirates still exist and always will. Pirates will continue on land or at sea, taking from those who have the possessions they want. 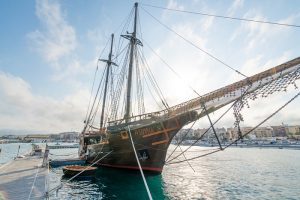 It is fair to say Pirates did not disguise ships so much. Perhaps that was more honourable than how a modern-day Pirate can hide behind a computer in a remote location. The reality is the same a modern-day pirate has no interest in rules. They play the game of life to survive with no thought about the suffering of others in the same way barbaric pirates did hundreds of years ago.

Historic Pirates such as Blackbeard, “Black Bart” Roberts, and Captain William Kidd became famous. Their names are synonymous with piracy. But what about the ships they used? Pirate ships became famous used by the men who sailed them. 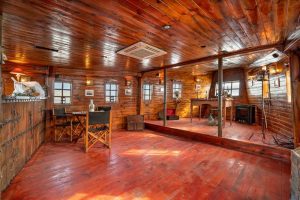 The Queen Anne’s Revenge was a giant pirate ship commanded by Edward “Blackbeard” Teach for about one year in 1717. Initially, she was a French slaving vessel. Blackbeard captured her and made modifications. She became one of the most formidable pirate ships ever. She carried 40 cannons with enough room left for men and loot.

Blackbeard often intimidates his victims into surrender. Fights were costly, so this was an economical solution. For months in 1717-18, Blackbeard used the Queen Anne’s Revenge to terrorise shipping in the Atlantic. Blackbeard’s victims rarely put up a fight handed over their cargoes peacefully between the massive frigate and his fearsome appearance and reputation. He plundered several shipping lanes at will. Unable to defend themselves, Blackbeard was able to blockade the port of Charleston for a whole week in April 1718. He plundered and looted several ships. Eventually, the town gave him a valuable chest full of medicines to make him go away. 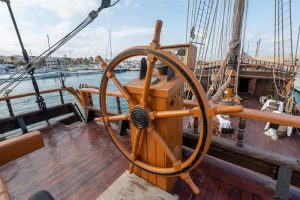 Bartholomew “Black Bart” Roberts was probably one of the most successful pirates, looting hundreds of ships over a three-year career. He had several flagships during this time. The largest of them was the Royal Fortune. She was a 40-cannon behemoth with a crew of 157 men. The Royal Fortune could slug it out with any Navy ship of the time. Roberts was aboard this ​when he was killed in battle against the Swallow in February 1722.

In February 1717, the pirate Sam Bellamy captured the Whydah (or Whydah Gally). She was a prominent British ship used to transport enslaved people. Bellamy was able to mount 28 cannons on her and terrorised Atlantic shipping lanes for a short while. However, the pirate Whydah did not last long: it was caught up in a horrendous storm off Cape Cod in April 1717, barely two months after Bellamy first captured her. The wreck of the Whydah was discovered in 1984, thousands of artefacts have been recovered, including the ship’s bell. Artefacts of the ship are on display in a museum in Provincetown, Massachusetts.

If the pirate ships above are not intersting why not charter your own pirate ship? You can hoist the jolly rodger on any yacht and you will become a pirate (the kids love it). Take a look at European Yacht Charters Mediteranian if you fancy adventures in Europe. Why not go all out and charter in the Caribbean then you will become a real pirate of the Caribean. (plastic swords and guns or the jolly roger flage are not provided by any of the charter companies)