They were our main competition

“Having been a Jeanneau Dealer the Beneteau history in the UK certainly was formidable for almost 20 years, I always considered Beneteau as the main competition to the Jeanneau Dealer Network. They were indeed tough competition for many years despite Jeanneau being owned by Beneteau since 1995. This article is respectfully dedicated to an inspiring businesswoman, Annette Bénéteau-Roux. She was born on 04-08-1942.” Rob Woodward of Network Yacht Brokers Barcelona.

As president of the Beneteau Group of companies from 1964 until 2004, Annette was largely responsible for the sustained success of the Beneteau family business first established by her grandfather Benjamin Bénéteau in 1884. In 2004, Annette Bénéteau-Roux passed on her role as president of the companies to Bruno Cathelinais. The following year she created the Beneteau Foundation. In 2007, Annette joined the board of directors of the cosmetics giant L’Oréal. Group Beneteau is now a global company. Annette retains a significant share of capital in this Foundation. Annette Bénéteau-Roux is deservedly reported to be one of the wealthiest people in France. 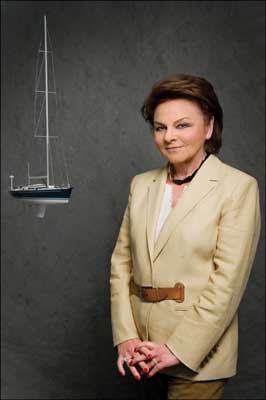 Benjamin Bénéteau was born in St-Gilles into a big family of limited means. At the age of 6, Benjamin was adopted by one of his uncles, François Houyère. As a single man, he passed on to Benjamin his love of the sea, adventure, and boats. At the age of 12, Benjamin became a ship’s boy on the lugger Eliza. His dream of building boats would then begin in the boatyard of his friend’s father. An important part of the Beneteau history

Close to the bridge, on Quai des Greniers, Benjamin created his boatyard in the year 1884 he would call it: BÉNÉTEAU. At the time, boats were called luggers, and smacks, all were small sailboats. However, for these fishing boats, the performance was considered best by who got back to harbour first, since the first home would sell their fish at the highest price. The search for performance would remain central to architects and boat builders, leading them to surpass themselves; never allowing themselves to be satisfied as they were continually innovating during the Beneteau history

Turn of the Century

In 1909, the first boat engine became available, whatever the cost, Benjamin would design the first engine-powered fishing boat in the region. Then the first world war intervened, the boatyard would not get back underway again until 1928. It was the time for André Bénéteau, son of Benjamin, then aged only 21, to take over. Benjamin’s absence was felt as André Bénéteau lacked experience in running the yard, this led to its closure. However, André had a gift for drawing. A fisherman’s friend had faith in him, and in the boat shed, he would draw and build his very first fishing boat. On the day the boat was launched, people gathered, as was customary, to take part in this event. They were stunned by the elegance of his fishing boat. The Beneteau Boatyard was back in business!

Then the Second World War came along, with the departure of some workers. At the end of the war, with the return of some workers, the Boatyard was beginning to get back in full swing again. Beneteau history It continued this way until the 1960s. However, work slowly dried up, workers did not whistle as often, customer visits became rare and the bank man’s visits more frequent. The yard was experiencing the end of an era, with a decline in the fishing trade. The passion of André Bénéteau was drawing, unfortunately, there was not much to draw. The family had to survive with children to support along with 17 ship’s carpenters and mates. The question was how do you find new jobs for ship’s carpenters?

In the early days, the family was trying to find a new purpose. Wooden fishing boats had declined and then an idea to make dinghies for sardine fishing boats out of polyester came from within the family. They did this with great success from 1963.

So it was, by visiting maritime cooperatives to sell dinghies to fishermen, and by showing them at the Lorient Biennial, that Beneteau would be noticed by the future dealers. The 3.60 m sardine fishing dinghy became the Guppy. The 4.30 m was the Flétan, and the small 5.80 m was a tulip-shaped speedboat, this was the last boat designed by André Bénéteau, it was called the Ombrine. In fact, Bénéteau had just created a new market, which in later years will be referred to as the recreational fishing boat.

It was January 1965 and the first Paris boat show for Beneteau was very stressful for Annette, André, and his wife Mimie. No other boat looked like the Beneteau and not being used to the attention it felt like Beneteau did not belong at the show. Just a few hours after the opening, three businessmen introduced themselves. They said the Beneteau boats were just what their customers were looking for.

This was the moment when Annette and her family started the first dealer network. Only rival Jeanneau operated a dealer network this way. Now they had the beginnings of their structure. For the next seven years the books would balance and the family Beneteau learned to listen to their customers. Sales of the Guppy, Flétan, Capelan, Cabochard, Galion, Forban, Kerlouan, Baroudeur, and Ombrine were developed. This was to be a full range of boats from 3.60 m to 5.80 m, precisely what the dealer’s clients wanted at that time. 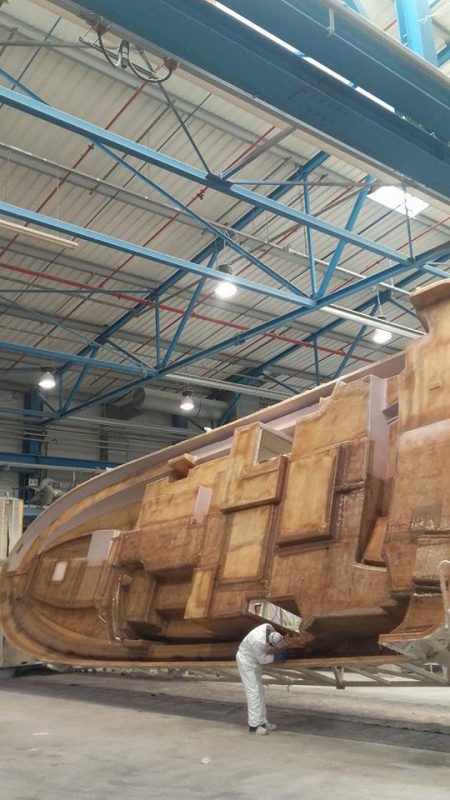 This would be an excellent year for Beneteau. With financial stability recovered, it was time in the Beneteau history to invest in the workforce and plant. As the economy improved, Beneteau moved more towards larger sailing boats. Owners wanted to see the sea from the saloon and have comfort on board.

This was to be the Evasion 32, followed by the Evasion 37 and 28 versions. A new plant followed in Commequiers, specially designed to manufacture what was thought to be the largest production boat that the sailing market will want to buy. At the same time, the Ombrine would give birth to the Antares range of motorboats, always designed by André.

Beneteau had a considerable market share in the recreational fishing boat market. Thousands of customers used Beneteau fishing yachts, but some of them left the brand because they wanted faster yachts. It became clear that Beneteau needed a quicker boat, so they needed to get help. François was an excellent regatta racer, he dreamed of creating a high-performing sailing yacht. André Bénéteau wanted to draw this yacht, but he realized architects with different experiences were needed to make this drawing. For the first time, a Beneteau boat was to be drawn by an architect from outside the family.

Luck was with the family, and they would be offered the moulds of L’impensable, the yacht design that would win the Half Ton Cup. Beneteau would redesign the sail plan, keel, and interior layout. The shape of the coachroof needed some modelling with André Mauric. It would be called the First. Beneteau showed the First yacht at Paris Boat Show, and it was a revelation. This yacht range was to become legendary in its class and opened the way for export.

It was the time in the Beneteau history of the Admiral’s Cup, among others, with their partner Corum, managed by Jean-René Banwart. Beneteau tried out new hulls in-order to identify the best architects in the world. This process would culminate in the First-Evolution, Lady B, and First Lady, all prototypes that would help Beneteau progress. They would later enable them to provide customers with the best production yachts ever built.

This is one of the most popular models in The Oceanis Yacht range.

Thoughts turned to restore the First Yacht. But how could this be done? François was eating dinner one evening at Costes Café with Odile, his wife. Comfortable in the surroundings, he thought of Philippe Starck. Annette arranged to meet Starck in Paris. They met but Starck didn’t hide the fact that yachts were not his speciality. He suggested they leave him a 35-foot Yacht in his garden at Montfort-L Amaury.

The idea being Starck would be happy to spend a few nights onboard to get the experience of what it was like to stay on a Yacht. Only after that experience would Starck be able to answer the question of a re-design. Although his approach was unusual, they met his request with a First 35. It was the first boat designed with two rear cabins, the fruit of the collaboration between François Chalain and Jean Berret. And so they waited, but in the end, it was worth it, what a breath of fresh air!

1991 brought a general economic crisis, boat builders all over the world found themselves struggling. It’s difficult to manage a crisis when the market has just gone. A few would manage it mathematically, leaving their companies leaderless, and some would manage things on a human scale, braving criticism and scepticism. Most would not cope at all and be gone forever. Beneteau succeeded in surmounting the ordeal as a company they stood together as they had trust in the staff knowing their common collective sense, the company knew they could count on them. In 1995, Jeanneau was purchased by Beneteau in an era of external growth. A chance to make peace with long-time rivals. The purchase of the Jeanneau brand would be the high point of the French sailing industry.

Time for Annette Bénéteau-Roux to step aside. This was not the end of her involvement with the company. Annette intended to lay a foundation for the global player that Beneteau had become. Annette handed the companies over to individuals who would take the Beneteau Boatyard on to a place where the Group would dictate its future and make Beneteau history.

In the future, no individual would be more significant than the principles set by Group Beneteau

The scale of business development was now staggering the Beneteau history is already legendary. Factories were acquired and Annette Bénéteau-Roux set up a governing body to ensure continuity for the future far beyond the fate of any individual. The governing body would be structured with a Board of Directors, mostly family members, including the Managing Director, that up until this point had been Annette Bénéteau-Roux. The method adopted to oversee the board comprised of a Supervisory Board – extending to people outside the group skilled in particular areas. This board would be an independent operational board of Directors. The companies advanced from 2008 to become Group Beneteau. This now includes the Monte Carlo Yachts and Boat Holding LLC brands with four prominent brands: Four Winns, Glastron, Wellcraft, Scarab, Jeanneau, CNB, and others.