If you have water in the bilge of your yacht and cannot find the source, my blog might help you locate your problem. 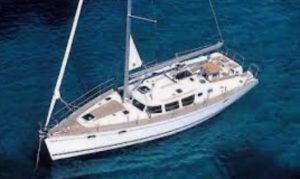 Many years ago, we took a beautiful Jeanneau 43 DS Yacht in part exchange for a new Jeanneau 47 Ds. The 43 was in Palma Majorca, Spain. Part of the deal being we collected the PX and shipped it back to base in North Wales. The deal was done, and so we flew out to Mallorca to collect the yacht. We sailed her back to Northern Spain, where she was collected by truck and delivered to the UK.

An irritating problem was discovered on the passage from Mallorca to the Spanish mainland. I questioned the old owner about the occasional running of the auto bilge pump during our passage to Spain. Ah yes, he said, “I have never been able to find out why that happens. She lets a little water into the bilge whenever I use the boat, the dealer who sold me the boat did try to fix it but said it was normal”!

A part-exchange deal on the yacht had already been done at this stage, so we accepted the 43 Ds without concerns believing we could easily find the problem. My engineers felt sure the hot water tank pressure release valve was faulty.

As it happens, I decided to keep the 43DS Yacht for one season. Business was good, and she was such a beautiful sailing boat it seemed a shame not to encourage my family to enjoy sailing a little. I decided to monitor the wet bilge to see if I could find out why it was always wet. It drove me nuts for weeks. Clearly, the hot water tank was not to blame (that would be far too easy).

My excuse for not finding 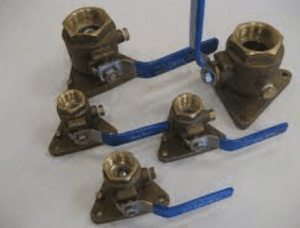 the fault more quickly was leaving the marina. It was impossible not to motor against a strong incoming tide until fifteen minutes after leaving the berth. One might motor for half an hour on a bad day until sufficient water was under the keel, allowing the engine to be extinguished. My point is the engine was always run, so it was difficult to isolate the problem. The strange thing, though, when the yacht was sat for extended periods, the bilge stayed bone dry.

I decided to lift the yacht as a matter of good practice. We changed all the seacocks, deep-sea shaft seal and cutlass bearing. Disappointingly none of that made the slightest difference. When the engine was running every several minutes, we noticed a drop of water that appeared to be coming from under the engine and then run along to the bilge pump located forward of midships.

The water ingress was annoyingly 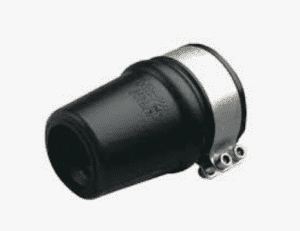 little, but I had to find the cause. Another conversation with the old owner confirmed my suspicions that this problem had been around since the yacht was built. I had paperwork evidence to show that the flexy exhaust system had been changed under warranty. This had not resolved the issue.

We removed a section of the floor in front of the engine to expose the hull. Sure enough, when the engine was run above 2000 rpm, a small trickle of water occasionally appeared running along the inside of the hull towards the bilge. We were certain it was an exhaust issue but could not see any problems.

On the Jeanneau 43Ds, a stainless steel silencer box fits like a cassette under the engine. This exhaust 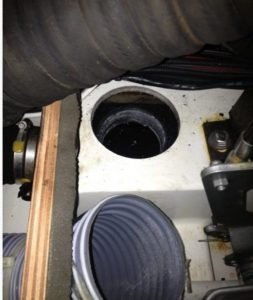 silencer is not visible without the removal of even more floor sections, and what a job that was! Not convinced it was leaking eventually we decided to remove it to examine the underside of the engine. It’s not an easy job to get it out, but finally, out she came. Absolutely nothing to see!

Undeterred, we pressurised this sturdy-looking component only to find a pinhole in one of the stainless welds that gave up its secret. A fault from day one! We got it!!

To be fair, they paid for our labour to remove and refit after re-welding a conversation with Jeanneau. Problem solved. 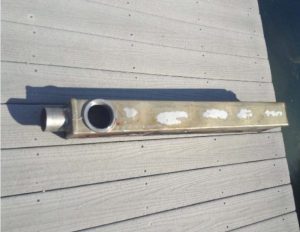 Now we get to the point of telling you this story. As it happens, the mystery was not confined to our yacht. I helped another dealer out who was having a nightmare with a client. The same sort of problem, a tiny leak but not when the yacht sat idle, so it was tough to diagnose the problem.

Taking the floor out of a yacht is not something that anyone would want to do without concrete evidence that doing so would resolve the problem. Not everybody realises that such a large component sits hidden under the engine compartment, totally concealed in a box section inside the hull stringers.

Now you all know.

If you found my blog interesting, have a look t my opinion on the Deisel bug issue causing more engine problems than any other individual engine fault in the marine industry.